So a helicopter with 5 digital high torque servos and a Gyro should draw minimal of 135mAh and a max of 10,060mAh. So with a 1500mAh rated battery pack, you can safely fly for about 8 minutes.

I tested a Futaba S9252 servo, and the current draw when turning on the system was 140 mA, then after wiggling the servo, it dropped to around 15 mA, and under load I got it up to 1500 mA, but I quit there as I didn’t want to risk stripping the servo. So I would guess under some 3D flying conditions, the draw on the system would be about 6,500 mAh, taking into account the throttle is never under too much load, as it only has to move the carburetor. I tested a Futaba S3151 servo that is connected to the throttle, and it read 8 mA at idle, and wiggling the throttle back and forth only got the servo up to 168 mA, not too much resistance on that servo.
So with a 1500 mAh rated battery, it is best to check the battery after 15 minutes.

The Futaba service tech recommended checking your battery power after each flight, and if it is below 5 V he did not recommend flying again until the battery was re-charged.

I used the following setup to test the mA draw of my equipment, just a servo extender, and cut the red wire, and ran that through my Amp meter.. 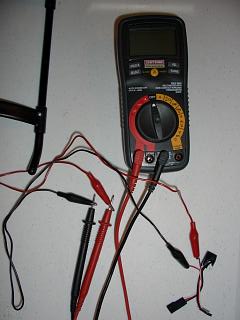