The Smith Miniplane that would not die.
(but kept trying)

John was at a swap meet and found a crashed Smith miniplane for sale, John felt he could fix it, so he bought it, and took it home. He built new wings for it, new cabane struts, landing gear, replaced all the hinges and bought a set of plans for it, rebuilt the fiberglass cowl which had been all chopped up, re-painted and re-covered it. He then took it to the field and had a friend take if off for it’s maiden flight. On the first attempt the plane veered left into tall grass and came to a sudden stop. No damage, to the plane, so he restarted it, and on the second attempt the plane got off the ground about 6 feet and quick banked left and flew knife edge like into the tall corn field. This time there was some damage, but not too much. When John got the plane back to the pits, he was grumbling about getting rid of it, as it wasn’t going to be a good flyer.
So a day or 2 later, I sent John an e-mail asking if he was serious about getting rid of it, and he was so I bought it from him.

10/5 - I picked the plane up, there was only minor damage to the covering, and the cabanes needed to be straightened again. After a night of working on it, I had my OS .50 in it, with 4 different type servos I found lying around, and a Futaba receiver. I ordered a pits muffler for it, as the normal muffler would not fit. But in the mean time, I had a 2 piece tuned pipe type muffler that would work on the .50, so I used just the adapter to start with, and I had to cut that to fit, but I wanted to see if I could get this plane in the air.
10/6 - So I went out and flew this plane. The first flight went fine, I was flying a left hand turn pattern, and the plane flew pretty good, but not great. I had a tough time tuning the motor because I was only using the short adapter to fly with (not much resistance). 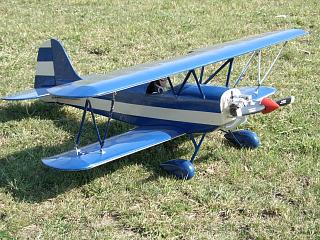 The second flight the plane did the same thing for me as it had done for John, it got about 6 feet of the ground, and it banked left and headed for the ground, I was able to hold it for quite a while, and slowed it down, and tried to land it out in the field. It cartwheeled on landing, but just a hole in the covering. I took it home again, and installed the tuned pipe, under the belly of the plane, 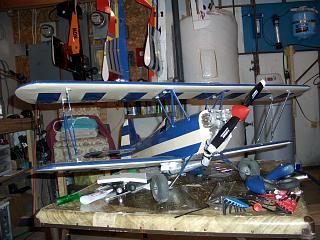 flew it again, it went pretty good as long as I used the rudder on takeoff, and when I accelerated. But all in all a successful flight.
Then I added the cowling to the plane once I got my pits muffler, and was ready for another flight.
10/9 – 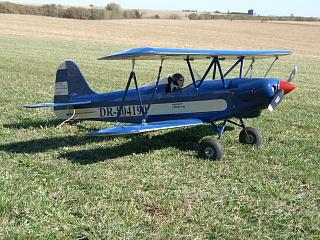 Was a perfect day for flying, I took out the plane and was ready to fly it, on the first flight, I had a heck of a time keeping the plane from making a left turn, as I was trying to fly a right turn pattern due to the pit area and wind direction. It was a hand full, I had to fly with about 50% - 80% rudder to get the plane to turn right. Left turns were fine, but not right. On the second flight as I was trying to bring the plane in for a landing, I must have had too much rudder, and elevator, and the plane snapped rolled at low altitude, and crashed. 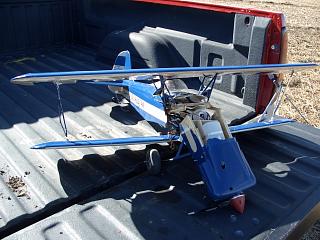 10/10 – I thought I would try and fix this plane, as I started to look at the damage, I just started gluing the broken pieces back together. I didn’t add any wood, just some thin and thick CA. but I thought that the engine should have some right offset to help it fly better, so I really added some right offset, and with some new covering ironed in place I had the plane read to fly again late that night.
10/11 – I test flew the rebuilt plane, now with about 10 degrees of right offset. Well the plane went airborne, and at about 6 feet it did a hard roll to the right, and crashed into the ground. This time the damage was worse than the crash on 10/9. Well that crash must have been my fault for adding too much right thrust, so I rebuilt the plane again that night, with thin and thick CA. I had to add 2 short pieces of balsa to brace a joint on the inside. And a little more new covering, and I was in business again, this time with 3 degrees of right offset.
10/12 – I test flew the plane again, and it flew just beautifully. So I flew it a second time and right after I did a low slow pass, 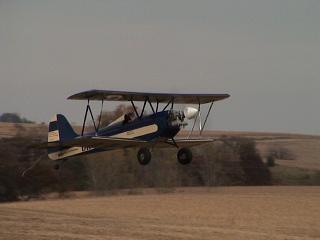 the motor quit, and the plane crashed again. This time the damage was all the way back to the vertical stab. So I rebuilt it again. First picture is at 7:56 p.m. and the second picture is at 11:48 p.m. 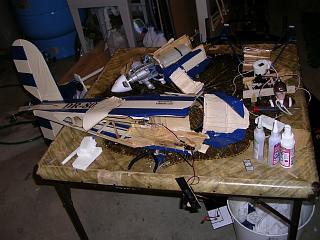 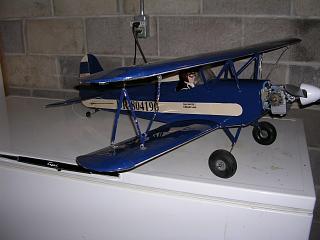 I added the coweling back on the airplane, and waited for a nice day to fly it.

10/20 - The weather was as good as it was going to be for a while, and better than it had been for a week, so I tried it again.

I have since added the cowling back on the plane. This plane now flies pretty good, and is no longer a problem child, although it doesn't look perfect any more, it is still a fun plane to fly.